A significant part of the Group’s energy consumption,as well as its climate impact, isrelated to the use of natural gas or biogasas well as purchased electricity and districtheating (indirect energy and direct energy).Reporting takes place from production unitsand offices at all business units except InstallationServices, which mainly includes roofingservices. Energy consumed by company cars,trucks and suppliers is not included. 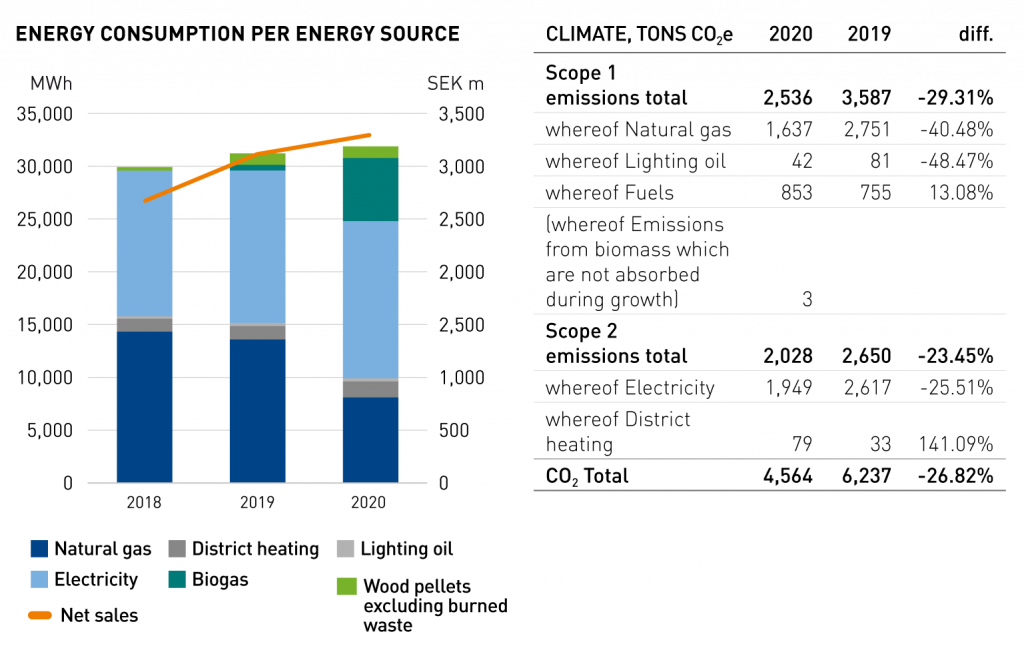 Energy consumption in 2020 increased by2.3 percent compared to the previous year.Net sales for the same period increased by6 percent, which is one of the reasons for theincreased energy consumption. The calculationof the Group’s carbon dioxide emissions (CO2) inscope 1 and 2 (direct emissions from controlledsources and emissions from the generation ofelectricity and district heating) is based on eachunit’s total average energy mix. The group’scombined carbon dioxide emissions amounted to4,564 tonnes (6,237), a decrease of 26.7 percent,compared to the sales which increased by6 percent.

As each country’s energy mix differs, nationalinitiatives are taken to introduce more renewabletypes of energy. Sweden, for example,signed an agreement in 2019 on the purchaseof green electricity (renewable energy sources)and a transition from natural gas to biogas inthe production of bitumen-based products wasmade at the end of 2019. This reduced CO2emissions by almost 1,100 tonnes of CO2ecompared to 2019. Denmark has taken thesame initiative with green electricity and willswitch to biogas in production from 2021, whichwill mean a reduction of about 750 tonnes ofCO2e compared to consumption in 2020.